The effect of insulin signaling on mosquito Fitness and immunity: 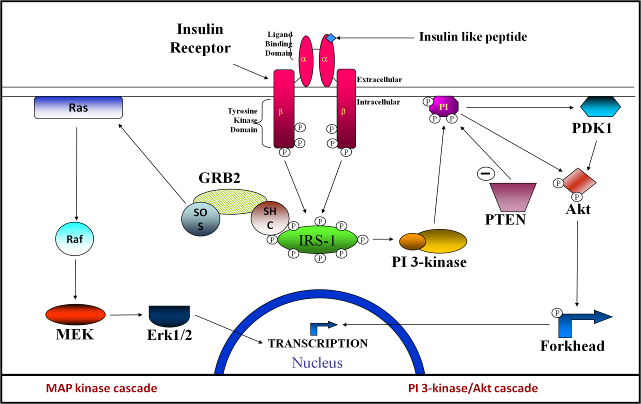 The insulin/insulin growth factor 1 signaling (ISS) cascade regulates a wide range of physiological processes in invertebrates including longevity, reproduction, stress, and immunity. We are interested in understanding the role this signaling cascade has on the ability of the mosquito to transmit disease.  Towards this goal we are studying two key physiologies that determine how effectively a mosquito transmits disease, lifespan and immunity.

The IIS cascade is initiated by insulin-like peptides binding to the alpha subunit of the insulin receptor. This induces autophosphorylation of the beta subunit which in turn phosphorylates insulin receptor substrate 1 (IRS-1). Phosphorylated tyrosine residues provide a binding site for the regulatory subunit of P13K and SHC which are at the branch point between the P13K/Akt and MAP cascades. P13K/Akt cascade: Upon binding to IRS-1 the catalytic subunit of P13K is released and travels to the cell membrane where it converts PI(4,5)P2 to PI(3,4,5)P3. PI(3.4.5)P3 provides binding sites for both Akt and PDK1 and brings these proteins together. Phosphorylation of Akt by PDK1 activates Akt allowing it to phosphorylate extranuclear Forkhead transcription factors. The activated transcription factors can translocate into the nucleus to activate transcription of a variety of genes. PTEN dephosphorylates PI(3,4,5)P3 to PI(4,5)P2 to downregulate the P13K cascade.

To understand the role of IIS on  lifespan and immunity we have genetically engineered key components of the IIS cascade into mosquitoes in a tissue specific manner.  Specifically, we have overexpressed the IIS activator Akt and the IIS inhibitor PTEN into the mosquitoes midgut and fat body.  We then test these transgenic mosquitoes against non-transgenic control mosquitoes to determine if increased or decreased IIS in a given tissue impacts lifespan or alters the mosquito’s ability to transmit the human malaria parasite Plasmodium falciparum.  This work is a collaborative project with Dr. Shirley Luckhart's research team at the University of Idaho.

Determining the age structure of Aedes aegypti populations in the Southwestern US:

The yellow fever mosquito Aedes aegypti is an important vector of dengue and dengue hemorrhagic fever, a virus that infects and sometimes kills thousands annually.  Although this mosquito is found in the Southwestern US, including Southern Arizona, the disease is not currently found in the US.  One possibility for this is that Aedes aegypti mosquitoes at the edge of their ecological range do not survive long enough to transmit the dengue virus.  To examine this we are attempting to identify genes in the mosquito that can be used as markers of chronological and physiological aging.  We have currently identified one such gene and verified its ability to accurately age mosquitoes under laboratory and semi-field conditions.  In addition, we have verified the accuracy of this gene on field collected mosquitoes by comparing the predicted mosquito age with the reproductive status of the mosquito.  Young mosquitoes that have not yet taken a blood meal and produced a clutch of eggs have tightly coiled trachea on their ovaries that unfurl as the ovaries increase in size during egg production.  Mosquitoes with tightly coiled trachea were consistently aged less than six days old with our aging gene marker compared with an average of 15 days old.  Finally, we are also utilizing near-infrared red spectroscopy (NIRS) to attempt to age grade field collected mosquitoes. This project is a collaborative effort with other researchers at UA, including Drs. Kathleen Walker, Kacey Ernst and Dawn Gouge.